THE EFFECTS OF THE GOSPEL (1)

A.   It was Paul, Silas, and Timothy who entered into the city of Thessalonica to preach the gospel to the lost (Acts 17:1-10).

B.   In I Thessalonians, Paul mentions the gospel coming to them (I Thess. 1:5).

For our gospel came not unto you in word only, but also in power, and in the Holy Ghost, and in much assurance; as ye know what manner of men we were among you for your sakes.

b.    The word is essential in the conversion process.

2.    The word also came accompanied with power and the Holy Spirit.

a.    Jesus had promised power to the apostles when the Holy Spirit descended upon them (Acts 1:8).

But ye shall receive power after that the Holy Ghost is come upon you:  and ye shall be witnesses unto me both in Jerusalem, and all Judaea, and in Samaria, and unto the uttermost part of the earth.

b.    This power came upon the apostles on the day of Pentecost following the Lord’s ascension to heaven (Acts 2:1-4).

c.    This power was needed for two reasons:

And they went forth, and preached everywhere, the Lord working with them, and confirming the word with signs following.

3.    Paul also says that the word was accompanied with “much assurance.”

a.    The words “much assurance” mean “full, complete confidence.”

b.    This confidence was displayed by Paul and his team for he says:  “…as ye know what manner of men we were among you for your sakes.”

1)    Vine says:  “…it describes the willingness and freedom of spirit enjoyed by those who brought the gospel to Thessalonica.”

a)    The Thessalonians saw these men as individuals who believed their own message.  They lived it in their lives.

3)    The genuineness of Paul and those with him gave assurance to the new converts in Thessalonica.

C.   The gospel that was proclaimed in the city of Thessalonica had a tremendous impact on some in the city (See Acts 17:4).  In this lesson, we will be examining:  “The Effects of the Gospel” (I Thess. 1:5-10)

And ye became followers of us, and of the Lord, having received the word in much affliction, with joy of the Holy Ghost.

A.   Their Description:  “And ye became followers of us…”

a.    The Greek word used here is not the word translated disciple.

2)    They also sought to live their lives in the same way Paul and the others lived their lives before them.

3)    NOTE:  Almost all of us have had people in our lives who were examples for us.  We sought to follow in their footsteps.

b.    The Lord Jesus Christ

1)    The Lord is the primary pattern to be followed.

Be ye followers of me, even as I also am of Christ.

B.   Their Difficulty:  “…having received the word in much affliction…”

2.    Luke’s account of Paul’s visit to the city of Thessalonica tells us about some of the difficulties the Thessalonians experienced at the hands of the Jews (Acts 17:5).

But the Jews which believed not, moved with envy, took unto them certain lewd fellows of a baser sort, and gathered a company, and set all the city on an uproar, and assaulted the house of Jason, and sought to bring them out to the people.

3.    LESSON:  Satan does not want individuals to convert to Jesus Christ.  He will seek to turn as many away as possible (See Acts 13:8).  The good and honest hearts will obey anyway, just as the Thessalonians did.

1.    These individuals possessed much joy within their hearts.

2.    This joy was produced by the Holy Spirit.

a.    The Holy Spirit reveals the Word of God which reveals how man can be forgiven of sins and put in a covenant relationship with God.

b.    When man obeys the truth, he can rejoice that he now possesses the spiritual blessings promised by God

And there was great joy in that city.

And when they were come up out of the water, the Spirit of the Lord caught away Philip that the eunuch saw him no more:  and he went on his way rejoicing.

So that ye were ensamples to all that believe in Macedonia and Achaia.

b.    Thayer:  the mark of a strike or blow, print…an example, an example to be imitated

3.    LESSON:  This should be the case with all Christians.  Our lives should be a pattern for others.

Let no man despise thy youth, but be thou an example of the believers; in word, in conversation, in charity, in spirit, in faith, in purity.

In all things shewing thyself a pattern of good works:  in doctrine shewing uncorruptness, gravity, sincerity.

B.   Their example was known to all who believed in Macedonia and Achaia. 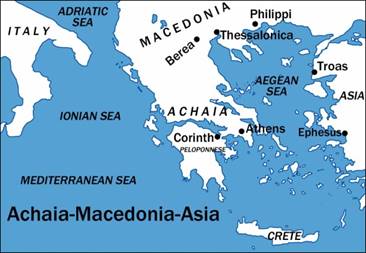 1.    “Koppe observes that Macedonia and Achaia were the two provinces into which all Greece was divided when brought under the Roman yoke…the meaning here is, therefore, that their influence was felt in all the parts of Greece” (e-sword, Barnes).

a.    It was on the Ignatius Highway and it was a port city on the Thematic Gulf.

b.    Somehow the church influenced many who came through the city.  These individuals would, in turn, speak of the Thessalonians to others.

3.    LESSON:  The lesson is about influence.  Christians are to be:

B.   It has the power to radically alter human lives for the better.

1.    The Thessalonians became people of God.

2.    They also became a pattern for others to follow.

C.   Next week, we will examine three other effects the gospel had on the lives of the Thessalonians.